Ketones, also known as ketone bodies, are a source of fuel for the body, especially the brain. With today’s diet most individuals burn glucose as a source of fuel, but ketones can also be made by the body for energy (endogenous ketones). Making ketones in the body for fuel was something our ancestors did with great regularity given the unpredictable/seasonal availability of food with no refrigerators or grocery stores. Today there are products that can be consumed for rapid conversion to ketones (exogenous ketones): coconut oil, MCT oil, salts, esters etc.

While glucose is typically an individual’s primary fuel, those with Alzheimer’s Disease have glucose uptake impairment in the brain. This is a condition that starts decades before cognitive impairment is evident and especially so in ApoE ε4s (Brain Glucose Hypometabolism and Oxidative Stress in Preclinical Alzheimer’s Disease, Mosconi, et al 2008). But the brain is a fuel “hybrid” it can also burn ketones even if glucose uptake is impaired. In fact, there are many who argue the brain prefers ketones even though it’s not the main fuel(glucose) of the brain . Because ketones offer a source of energy for the brain, they are often advocated for ApoE ε4s. For more information, see Ketosis_and_Ketogenic_Diet 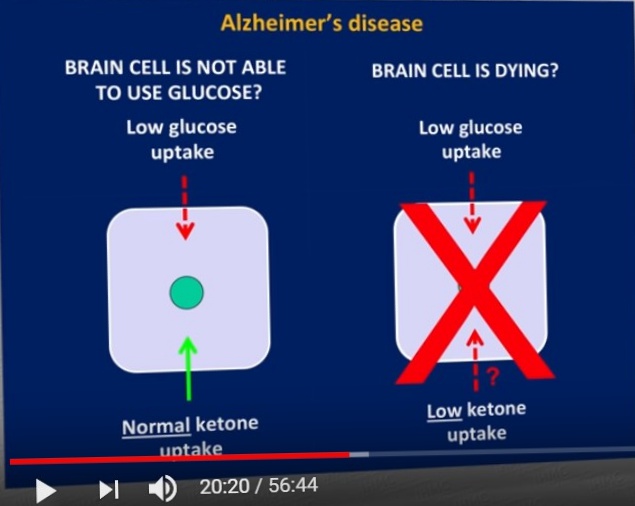 Source: Screen capture at 20:20 from the video presentation Can Ketones Slow Down Alzheimer’s? https://www.youtube.com/watch?v=pR8bHXZKZj8 published on YouTube Mar 8, 2018. A lecture given by Dr Stephen Cunane at The IHMC (The Institute for Human & Machine Cognition) as part of their Evening Lecture series.

In the presentation Can Ketones Slow Down Alzheimer’s? Dr Stephen Cunnane, who has researched omega-3 fatty acids and ketones in human brain development and function for over 30 years, posits two possibilities for Alzheimer’s. (1) That the brain’s cells are alive but glucose uptake is impaired, so unless ketones are available, they are starved for fuel. (2) That the brain’s cells are dead/dying and thus unable to uptake any form of fuel either glucose or ketones. He has found the first scenario to be more accurate: those with Alzheimer’s are able to use ketones even though they are unable to use glucose. Thus the rationale for providing ketones to enhance cognitive function. This of course is only accurate when intervention to provide ketones occurs early enough that the brain cells haven’t died due to a lack of an energy source and exposure to oxidizing agents.

Coconut oil and MCT oil help boost ketones/brain function because, unlike other oils/foods, they are high in Medium Chain Triglycerides. In fact that’s what the MCT stands for: Medium Chain Triglyceride. The name just refers to the way the carbon atoms are arranged in their chemical structure, the important quality is in how they are metabolized. The fat in most food consists of long chain triglycerides. When you eat fat in the form of long chain triglycerides it is broken down in the small intestine. But medium-chain triglycerides, bypass that process, they go to the liver where they are quickly converted into ketones, which are then released back into your bloodstream and transported throughout the body, including the brain, to be used as fuel.

While both Coconut oil and MCT oil can boost brain function, ApoE ε4s are often advised to use them judiciously with the preferred source of ketones coming endogenously, i.e. made in the body by the liver through a process called ketogenesis. See Ketosis and Ketogenic Diet. In his book The End of Alzheimer’s Dr Dale Bredesen , internationally recognized expert in the mechanisms of neurodegenerative diseases, refers to coconut oil and MCT oil by saying, ”But both may also have drawbacks for ApoE4-positive individuals …If you are ApoE4 positive, think of MCT and coconut oil as temporary crutches to ease your segue into fat burning mode.”

What Dr Bredesen is referring to when he says “segue into fat burning mode” is the keto adaptation process. When we are born, we are efficient ketone burners but as we approach adulthood, and especially with eating a mostly carbohydrate diet, our ability to produce/burn ketones goes into “sleep mode.” When reawakening this ability to burn fat for fuel in the body, the brain has to be weaned off the glucose and a person can feel bad (keto flu) during this adaptation process. Adding MCT or coconut oil can ease the transition.

However, there are areas of concern for ApoE ε4s when it comes to relying solely on supplementation of ketones to aid cognition versus addressing insulin resistance and using ketones produced by the body.

Other products to enhance ketones

Not to be confused with palm oil, is also a source of Medium Chain Triglycerides. Good for cooking, lower in cost, can be stored longer than other vegetable oils, and remains stable at high cooking temperatures, smoke point of 450°F/232°C. However, it is less advisable for ApoE4 ε4s than coconut oil. Palm kernel oil is high in saturated fats: approximately 82%, and contains no Omega-3s, see Fats, Omega -3(ω-3) & -6(ω-6), DHA and More subheading Omega -3s and Omega -6s. It is high in lauric acid which has been shown to raise blood cholesterol levels, both LDL-C and HDL-C, see Cholesterol, Lipids and Treatments, including statins

MCT powder is a powdered form of medium-chain triglycerides. It is made via a process similar to how protein powders are made: spray drying. The product is then micro-encapsulated with a powder “carrier shell” to give it the appearance and convenience of a powder. MCT oil powders are generally composed of starch/ starch derivatives and milk proteins that can raise insulin levels. MCT powders need to be selected carefully to prevent insulin spikes.

Advantages of the powdered form of MCT:

It should be noted that virtually all research on the benefits of MCT supplementation has used MCT oil, and not MCT oil powder.

For more information on MCT powders and a comparison of products: MCT Powder: How it Works, Comparison to MCT Oils, and Review of MCT Powder Products

Deeper Dive into the Science

Recognized experts on ketones/exogenous ketone use

References on ketones and the brain