From ApoE4.Info Wiki
Jump to navigation Jump to search

In his practice, he tests multiple biomarkers to holistically optimize the functioning of the body, organs, and brain. Dr Gundry has been regularly testing and tweaking the diet and supplementation regimen of his patients since 2002. This testing includes the ApoE4 allele. He has followed thousands of ApoE4 patients.

He has specific dietary recommendation for carriers of the ApoE4 allele, which is discussed further in this post.

Detailed information on his dietary recommendations can be found in his books. The first book “Diet Evolution: Turn off the genes that are killing you-and your waistline-and drop the weight for good” was published in 2008 and discusses the disconnect between today’s modern diet and the food that human genes need for healthy living. Dr Gundry subsequently stated that “Diet Evolution” was a compromise between what he prescribed at the time and what the publisher thought would sell; therefore, it is not a complete guide to his dietary advice. His second book “Plant Paradox: The Hidden Dangers in "Healthy" Foods That Cause Disease and Weight Gain” was published in 2017 by a different publisher who provided Dr Gundry more freedom to address his findings. He has subsequently published related cookbooks and a book on Longevity, "The Longevity Paradox" see Books by Dr Gundry section below for details on each of his books.

For years, Dr Gundry has been compiling a list of acceptable and forbidden foods and providing this list to his patients. Originally called his “Matrix Diet” there are now two lists named after his second book: 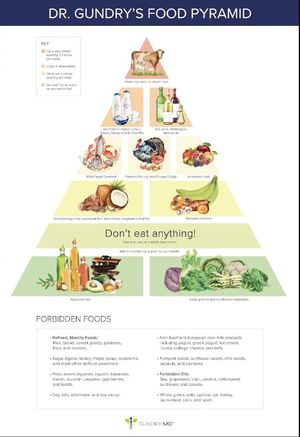 can be used for guidance in implementing these lists.

These are the major points of the pyramid; additional information can be found at YouTube video - Dr Gundry's Food Pyramid

The pyramid also contains a list of food to avoid completely. Don't dismiss this. In his Plant Paradox book, he presents four rules, and rule #1 is "What you stop eating has far more impact on your health than what you start."

The subject of lectins has been discussed numerous times on the ApoE4.info website. There are many who dismiss this dietary advice because, while there are studies, there’s no overwhelming scientifically collected evidence. Dr Gundry’s recommendation comes largely from his experience with tens of thousands of patients. Dr Gundry cites his own self-skepticism in Plant Paradox: “Believe me, twelve years ago I myself would have tossed this book out the window…” (page 70, hardcopy of "Plant Paradox"). So this skepticism is firmly based.

Perhaps the rationale for this has to do with the fact humans have been eating high lectin foods for a number of years without obvious consequence. In his Plant Paradox Book, Dr Gundry explains that today’s environment is a lot different than that of our grandparents. It’s not just the lectins, it's:

1. Our sensitivity to lectins has increased greatly due the recent introduction to chemical and other body disruptors, such as food additives, food preservatives, the introduction of NSAIDS pain pills in the early 1970’s, stomach acid reducers (Prilosec, Prevacid, Nexium) plastic food packaging/containers (like those containing BPA), petrochemical fertilizers introduced after World War II, herbicides, biocides, food that is now Genetically Modified (GMOs), skin-care products, hand sanitizers, on and on. These are compromising the body's ability to deal with lectins.
2. We eat a lot more lectins today than in the past, largely because the dietary guidelines changed in 1980 resulting in greater carbohydrate consumption. Also, some foods today have been modified and consequently contain more lectins than in the past.
3. Lectin silently and slowly causes the body to attack itself, so except for those that are particularly sensitive, there’s no immediate, “if I eat a tomato, my rheumatoid arthritis flares up” effect.

Although they derived their findings through very different means, there are numerous overlaps in Dr Gundry’s and Dr Bredesen’s protocols. This coincidence did not go unnoticed by the ApoE4 community. In 2016, the ApoE4.info group introduced Dr Gundry and Dr Bredesen to each other. They each gave a presentation at the Ancestral Health Symposium and were able to exchange thoughts with each other at the group dinners each evening. The two have become good friends. Dr Bredesen is quoted on the back cover of Dr Gundry’s book “Plant Paradox” and Dr Gundry is quoted in the "Praise for the End of Alzheimer's" section of Dr Bredesen's book.

On August 21, 2017, Dr Gundry posted a video, Dr Steven Gundry interviews Dr Dale Bredesen about "The End of Alzheimer's"the book that Dr Bredesen had just published. In the interview Dr Bredesen said, "In fact I'm actually starting phase one of your protocol right now myself, which I think is fantastic and actually fits very much with what we found in the test tube over the last 28 years on Alzheimer's disease."

Presentation on ApoE4 at AHS16

Dr Gundry Abstracts and Posters to the American Heart Association

NOTE: The link does not go directly to the posters, use the search button and type in "Gundry" for access.

Two ApoE4 patients' consultations with Dr Gundry. The format of the sessions are to go over our labs first, then ask questions.